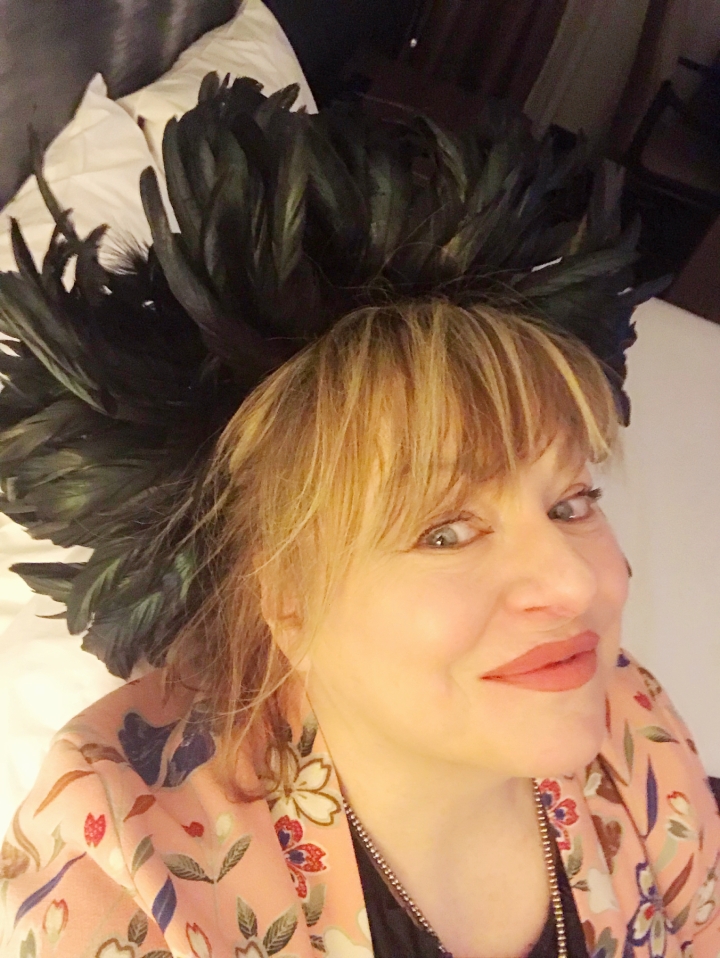 When I turned fifty it was weird. There was a big surprise party and music and friends and family ,and yet, I felt a bit creep’d out. I felt ashamed for being that old all of a sudden and I had a flash of my mother, at 50, as she began her descent into the older woman syndrome.
Close cut short permed hair, stretchy pants, an overly embellished sweater and sensible flat shoes. The saggy bum of those shapeless, navy polyester’s, lent the observer to picture a loaded diaper beneath. The gorilla shaped sweater with the huge pieces of reflective mirror,
and plastic gems bedazzled all over it, and those black, faux suede, men’s- slipper inspired ladies’ shoes will never be erased from my memory banks.
My mother had gone from a fashionable woman who bought expensive crepe and silk dresses from Italy to a Sears bargain hunter. It was the 1970’s.
I still have her oldest dresses hanging in my closet. They are gorgeous and timeless …and I can’t fit into a single one. The last time I wore them was at the age of 18 and after that I became “big boned” with “lovely skin”.
When I was very young it was important for me to look like my friends and we all shopped at the same stores and bought the same clothes. We went to the same hair dresser and had the same haircuts. Here is the thing though; everyone has a different body type and skin tone and just because hot pink looks good on my best friend does not mean it looks good on me. In fact, it brought out the rosacea that I didn’t even know existed until it was highlighted by a hideous pink neon.
As I got older, I realized that freedom of expression and creativity could be blasted out to the world through our appearance. A light bulb went off as I entered my punk phase. Stealing my mom’s red, pointy toed, curling boots; shredding a couple of miniskirts; slapping on fishnet tights and hair spraying myself into a spikey rooster, I’d hit the clubs to pogo the night away. I’d look around the scene with my black coal rimmed eyes and see another 75 carbon copies of myself but I still felt like I was a rebel and doing something different. I was an individual.
I then had a chameleon phase in college where I would be whatever the situation called for. If I was going to see The Grateful Dead I would be a hippy. If I was going to see Elvis Costello I was a new wave punk. If I was going to see the B-52’s I had the biggest bee-hive. It allowed me to experiment with different looks and find whatever felt more like me.
At some point, I realized that they were all me.
Turning fifty. Turning fifty gave me an epiphany. I see that with age comes absolute freedom to express yourself. Some rules do apply though: do not wear something so short that you are exposing your sagging arse and, at some point, you’ve got to cover up that Neanderthal wrinkler cleavage. Getting older sucks but there are ways to celebrate the, “I no longer give a shit” period of our lives.
Working in the film business has allowed me to present myself at work in whatever phase I was going through, finally landing where I am today.
My philosophy is this. Dress for how you are feeling. Don’t let your best dresses hang in your closet waiting for the right opportunity to wear them. Combine fancy with casual. Experiment because, at your age, you can be eccentric now.
With some laughs and fashion ,and loads of makeup, I think I’ll get through this next stage of my life,
I hope you enjoy my posts geared for those of us who are in our “golden years”. Barf.